May 6, 2019 — 11.52amCommercial property giant Brookfield and Chevron Australia have inked an agreement which will see the development of a 29-storey office tower built at Elizabeth Quay.

Under the deal, which was signed in Perth on Monday, Brookfield would buy, develop and lease back to Chevron a commercial office block at 1 The Esplanade, on the corner of The Esplanade and Barrack Street. Brookfield, Chevron and the state government have today signed an agreement to build Chevron's Australian HQ on a premium block on Perth's Elizabeth Quay.

The building would become Chevron's Australian headquarters with the energy company agreeing to a 15-year lease over 42,000sqm of office space.

The development will include 54,000 square metres of office floor space, exhibition spaces, a lobby and conference facilities.

Childcare and gymnasium spaces along with retail tenancies, cafés and restaurants aimed at bringing people to an open plaza facing Elizabeth Quay are planned for the lower levels.

Premier Mark McGowan said the deal would create 1000 jobs during construction and bring thousands of workers to Perth's CBD after completion. 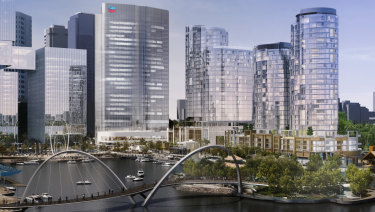 "This is another expression of confidence in the Western Australian economy, shows things are happening, businesses are investing and that there's a real sense of optimism here in Western Australia," he said.

"Thousands of employees will be based at the headquarters, benefiting small businesses throughout the city, and activating Elizabeth Quay.

"We've been committed to making Elizabeth Quay a success, and this development will go a long way to making sure this waterfront asset is a feature of our city for decades." 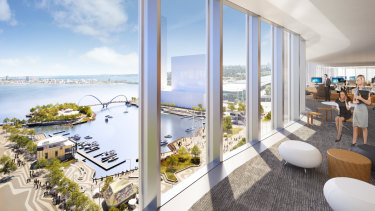 An artist's impression of the view from an office inside Brookfield's Chevron development at Elizabeth Quay.

"We're the largest office landlord in the Perth market and for a while now we've seen a lot of signs of confidence and growth of our tenants," she said.

"We see this as a great demonstration of the ongoing growth of the office market and in that the continued flight to quality to the best assets in the market, so we're proud to deliver what will be one of Perth's premium office buildings."

"Chevron’s new headquarters will contribute to delivering a vibrant, activated Elizabeth Quay, which is ultimately expected to be home to 1400 people and 10,000 workers," she said.

"Hundreds of millions of dollars of taxpayer’s money was used to create Elizabeth Quay, and this government is 100 per cent committed to making it work and becoming something all Western Australians can be proud of."

GO BACK TO PREVIOUS PAGE