Apartments are holding up much better than houses as rates rise

Are units finally having their moment in the sun?

Well, after spending years in the shadow of extraordinary house price growth, units now look to be having their moment, holding up much better at a time of rapidly rising interest rates. 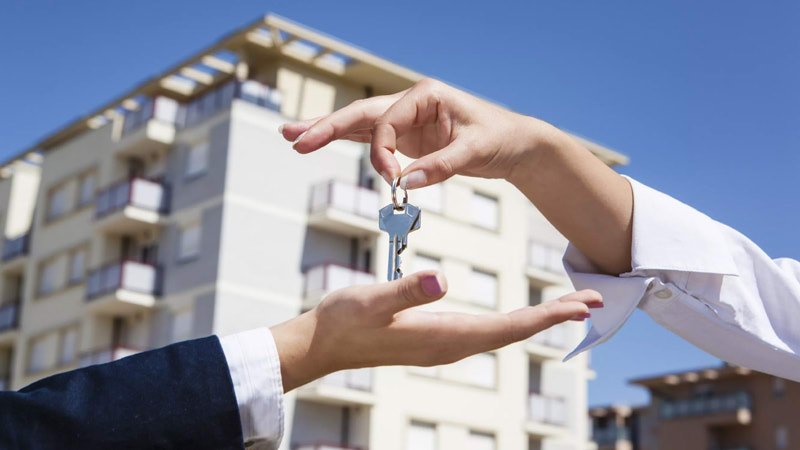 In fact, house prices rose sharply as people prioritised more space and a better lifestyle during the Covid pandemic, with record low-interest

rates also making it cheaper to borrow more. But as rates have climbed, home prices have quickly begun to fall around the country, down 2.7% nationally from their March peak. Sydney and Melbourne have led the price declines, both sitting close to 5% lower than their respective peaks. But a curious trend is emerging as the downturn unfolds – the apartment market is holding up better. House prices have fallen since March According to PropTrack’s Home Price Index, house

prices have fallen by 3.6% nationally since March, whereas the decline in unit prices has been less severe, down 2.6% from the February peak. Ms Eleanor Creagh, Senior Economist for REA Group shared her insights:

"The price falls for houses so far are also larger and more widespread. Looking at the 88 SA4 regions Australia-wide, 71 are experiencing house prices falls.

The SA4 region of Sydney’s Northern Beaches tops the list for the largest price fall across both houses and units, with house prices down 10.6% and unit prices down 9.8% from their peaks in October last year." 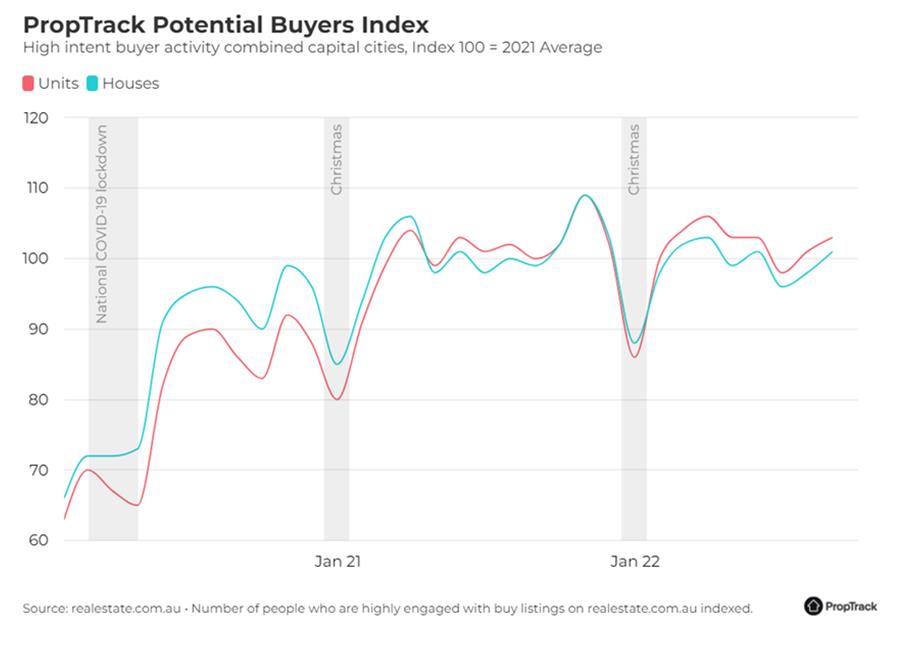 However, this follows the Covid-induced preference shift that saw houses outperforming units substantially for a prolonged period. Buyers paid a premium for more space and larger homes when the experience of lockdowns and tough restrictions made apartment living less attractive. For many, the pivot toward remote work – and thus more time spent at home – made larger dwellings a more alluring proposition. As a result, the premium people paid for houses greatly accelerated in recent years. From the pandemic onset in March 2020, house prices rose 35% to their peak in March this year, while unit prices only rose 12% to their peak. Unit value growth lagged that of houses since the pandemic's onset 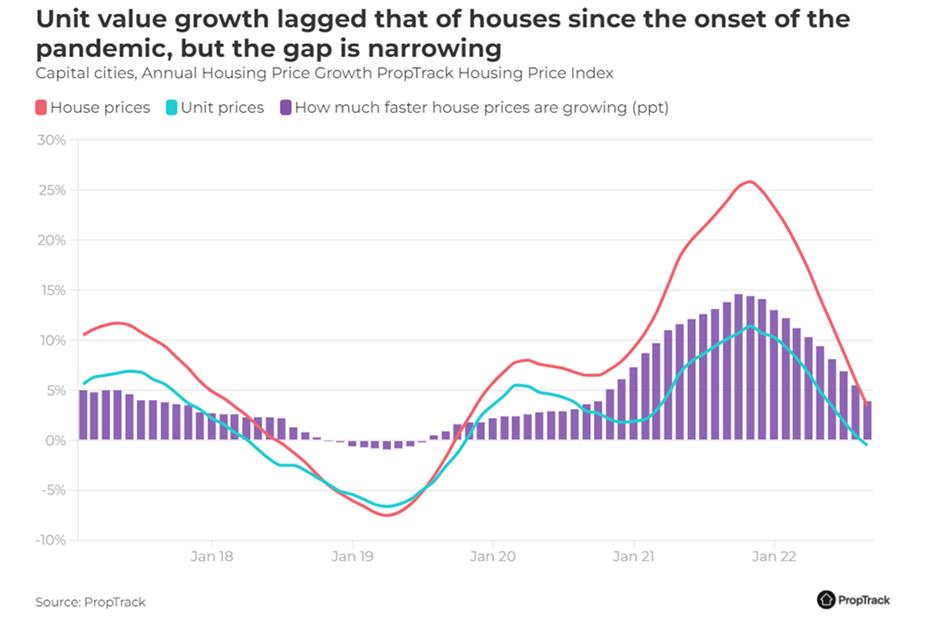 Obviously house prices command a premium over unit values. But this two-speed market drove a record extreme in the price gap between houses and units. And that’s now beginning to narrow as the apartment market holds up better. In fact, house prices are falling almost twice as fast. 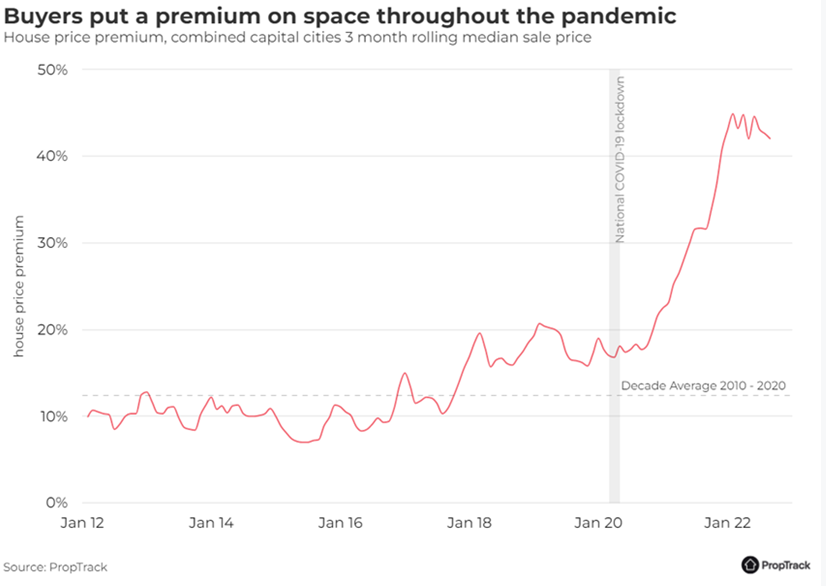 And other factors, like lower levels of investor participation, reduced overseas demand, and weaker inner-city rental conditions, also contributed to the relative weakness in apartment markets during the pandemic."

As interest rates have risen, engagements with unit listings have been better

Fewer buyers are now competing for an increased number of properties available for sale. This has brought a much healthier balance to the market. Ms Creagh commented: "The median number of days a property was listed on realest

ate.com.au in August 2022 was 44 days, up from 42 days in July, with properties selling slower as the market has cooled.

Compared to August last year, across the capital cities, days on site have climbed the most in Sydney, Melbourne, and Hobart.

It makes sense as these markets have slowed fastest relative to last year, with both Sydney and Melbourne leading price declines to date.

Compared to July, days on site climbed most in Brisbane, with properties taking 10 days longer to sell."

Demands have held up better in the apartment market

Ms Creagh explained: "On a per-listing basis, demand from potential buyers in the capital cities has eased more, as the pace of new listings remains historically strong against a backdrop of moderating demand in recent months. It slipped 18.5% for capital city house listings and just 8.1% for unit listings from the peak per listing demand seen in January this year."

The rising costs of borrowing have pushed investors towards lower-priced properties, with a focus on apartments. Of course, rising interest rates not only increase repayments but reduce the amount prospective buyers can borrow. 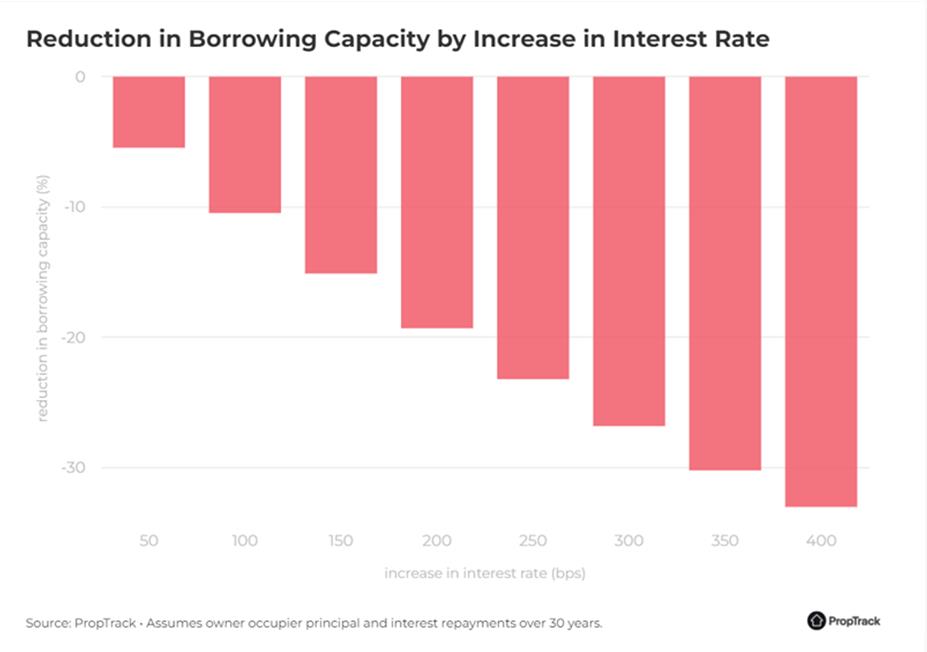 Ms Creagh further said: "Now the cash rate is sitting at 2.35%, maximum borrowing capacities have dropped by about 20%. Since most people borrow to buy a property, the pool of buyers qualified to purchase higher-valued homes is shrinking. Although not many borrowers take out a loan of maximum size. This is hitting the upper end of the market and along with other factors like the supply of zoned land, higher incomes and mortgage debt, more expensive properties and regions are seeing prices falling fastest. Further, the borders have reopened, and the rental market has tightened to extreme levels as cities settle into a post-pandemic normal, sparking strong unit rental demand. These factors are also seeing demand from potential buyers hold up better in the apartment market." Breaking this out by capital city, Hobart, Canberra, Sydney, and Melbourne have seen the biggest pullback in potential buyers per listing for houses from their respective peaks. This makes sense given these markets have seen a stronger pace of new listings and total stock normalising more quickly, giving buyers more options. In addition, late last year, the Australian Prudential Regulation Authority (APRA) increased the serviceability buffer applied to new mortgages. Banks now must ensure a customer can service a mortgage rate that is three percentage points higher, compared to the 2.5 percentage point buffer previously in place. This reduced the maximum amount prospective buyers could borrow by up to 5%. Ms Creagh further explained: "This means the reduction in borrowing capacity is larger for those who have existing debt or loans with higher rates. That typically affects investors more – another factor sustaining the relative attractiveness of cheaper priced properties, and especially units. While investor activity has slipped as rates have risen, tight rental markets and strong tenant demand for units may contribute to investor activity in the apartment market, alongside affordability considerations."

What can we expect moving forward?

Well, housing affordability will get worse as repayments become more expensive, and together with the relative discount and typically cheaper price point the apartment market offers, units are likely to continue to hold up better. However, affordability constraints, shrinking budgets, and the value units offered are all helping to prevent apartment buyer demand from falling as fast.

In fact buyers are once again trading space for place.

They want to live in desirable neighbourhoods and are prepared to live in apartments, townhouses or villa units rather than move further out. More affordable sectors of the market are also insulated by demand from first-home buyers utilising government support schemes. The cheaper price point of units provides a more accessible entry to the market, and if the proposed Help to Buy scheme is implemented, there will be a lot more choices under the proposed price caps in the apartment market. The same is also true for the extended Home Guarantee scheme. Source of commentary and graphs: REA Insights